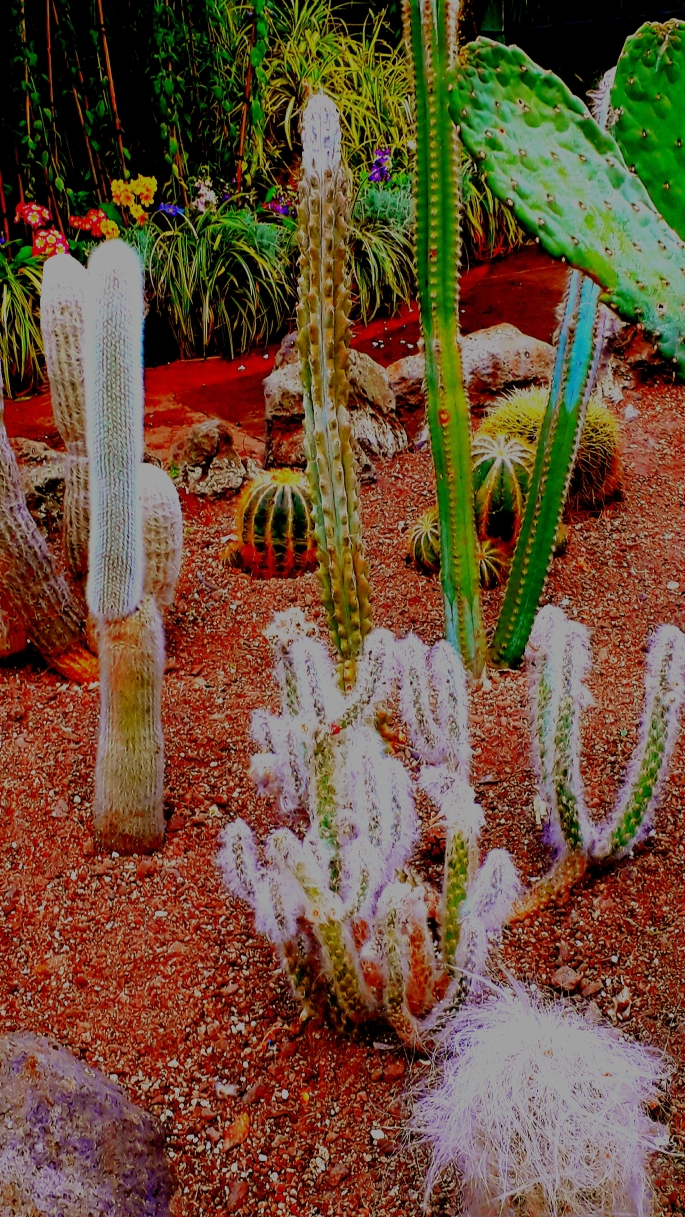 You either love them or hate them.

I find them beautiful.

Maybe because the danger factor makes them more alluring.

Perhaps because I can be a prickly bastard too…

Just behind Bastion Point in Auckland ,and up the hill by the marae, sits a trig station.

One of thousands over the country ,on often high vantage points ,acting as geodetic reference  points. Once, and sometimes still used by surveyors for precise bearings of latitude and longitude.

It caught  my eye this morning, with its stark black and white markings against the cobalt blue sky.

As a child I thought they were totally cool and somewhat mysterious. Maybe aliens had planted them there.To ascend to the top of a hill and then clamber up the trig was to be lord of all you surveyed(excuse the pun).

A symbol, a signifier, a marker. Like a compass, objectively true.

Sometimes its enough to know exactly where you stand…

The next line of the W.B. Yeats poem featured in the previous post  The Widening Gyre goes like this:

“Mere anarchy is loosed upon the world”.

This tropical themed garden features tigerish striped bromeliads, some with sharp points and serrations and is altogether an explosion of chaotic shapes and colours in every direction; botanic flares and shrapnel, an anarchic sprawl.

No neat flowerbeds planted in rows –  here there is the sense of the wild and  uncontrolled world that Yeats was on about .

“Turning and turning in the widening gyre

The falcon cannot hear the falconer

– W.B.Yeats ,excerpt from ‘The Second Coming’

These often quoted lines of poetry are mesmerising and terrifying to me , and the whole work is said to be prophetical and allegorical.

I’ll leave the latter for the scholars of literature to debate.

But the words have spoken to me deeply and personally of a time when my centre could no longer hold.

I was a lost falcon without direction.

Forces were beyond my  control.

As shockingly vivid as the hues and shapes of this picture, but thankfully in the past.

All I can say, if you’re in the eye of a chaotic hurricane , is that ” this too, shall pass.”

All the way along the waterfront on the train today , the rainclouds hovered darkly just above a layer of evening light.

They were still that way as I alighted onto the platform.

Not me, for the anticipation of rain and its release upon us is so wonderfully life affirming.

And what was signaled has now fallen with great intent…

“How many cares one loses ,when one decides not to be something ,but someone.”

This quote has almost been my mantra in the past year or so.

The creeping realisation came that I was defining myself by my various jobs,roles and external expectations , not by my core,essence and natural intuition. And I was losing myself in the process.

The labels that the world uses to pigeonhole us should not stick to us through everything , or anything all really, but they do .

Be warned ,you might just have to break a jar or two to lose those labels, and just be someone – you. 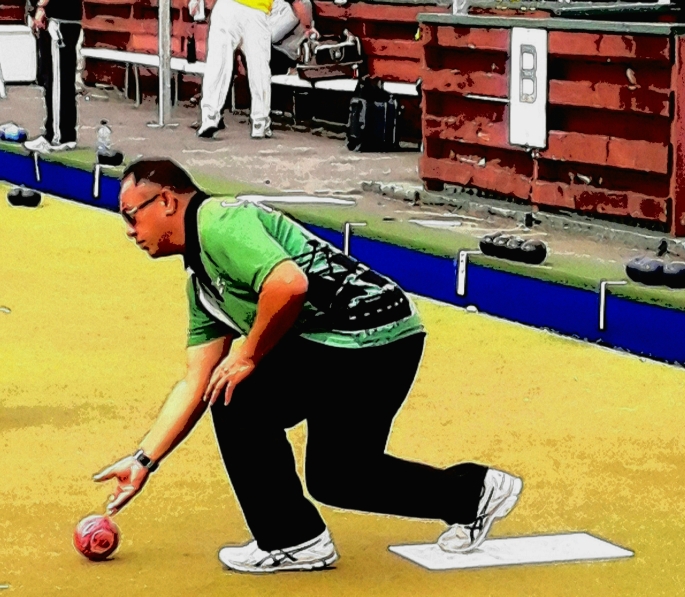 The summer lawn bowls season has just ended in New Zealand, and I thought I should mark the end of the high time in my sport with a shot of my friend Vince in full flight on the grass at the Auckland Men’s  Champ Singles last month. Nice style!

Played him that day, got beaten 21-9.He can be pretty bloody good ….

No dice then, but that’s sport – put the poor games behind you, learn and move on. There’ll be other opportunities.

Not that the sport goes completely into hibernation, just less intense competition and a move onto artificial surfaces over the winter.

Butt there is nothing like the feel and subtle variation offered by natural, grass greens and the warmth of the sun on your back as you play.

See the below link on this blog for more:

Following on from the previous post, and Brian Eno’s musical longing for ‘Another Green World’,more extraterrestrial dreaming on my part.

It shouldn’t surprise that none of the objects are those of the title.

Nor is it the image of a planetarium.

It’s  a skylight in Central Auckland’s Britomart Station, above me as I sat waiting on a bench for the next train home.

Late Friday afternoon, wearied, my mind wandering to a galaxy far, far away from work, but you don’t have to be freaking rocket scientist to work that out…

If you have only two minutes in your no doubt busy life, that is ample to squeeze in this 1975 miniature masterpiece by ambient music godfather Brian Eno.

It transports me to another place for sure, but since it has no words I will shut up and you can take a tiny trip of your own…

Admittedly it was a bright, sunny  morning when I walked by this succulent plant hanging down a wall, but just not in that sort of mood right now, sorry, so thought it should get the antique Victorian goth-y pattern makeover…much better!

Watching a Brit television drama recently ,and one character asks this question of another,slightly menacingly.

A peculiarly British expression ,”…when ( you are/ he, she,it  is) at home.” A somewhat sneering or perjoritive sense to it.

“At home” meaning “really” or “actually”.

It is a great question  to ask actually, but probably not the best icebreaker  or small talk opener in the world.

I was  fortunate today to have a lovely and open conversation with someone I hadn’t seen in a while and it was a relief to be able to  honestly share my current reality ……who I was when I was “at home”.

Without any sense of being sneered at …

I only became aware this week of the Buddhist concept of the “monkey mind” when I was reading  a story online about a depressed US army veteran who had been taught tai chi in order to quiet the negative voices in his head.

Another magazine article at home awhile back described an acquaintance of mine as having a “manic, fizzing mind.” The description was bang on.

I can relate …in fact this blog reflects a lot of things that just bounce around inside my head …I have to get rid of some of them in cyberspace…sorry!

But seriously ,apparently the average person has about 50,000 separate thoughts a day(many about the same thing) and a lot of those are not relaxing or mindful thoughts.They are of the “need to do this..now”  and  “next, that”, or just general worry bead handling.

Some of this is necessary for personal organisation and survival; too much of it causes mental and physical fatigue.We simply can’t unwind and become restless and unsettled.

Buddha wrote: “Just as a monkey swinging through the trees grabs one branch and lets it go only to seize another, so too, that which is called thought,mind or consciousness arises and disappears continually both day and night.”

The trick,supposedly, is to understand that aspect of ourselves and then tame the monkey, not fight it.

I won’t get into the mindfulness techniques to do that because I am no expert,but  it is good start just to realise that maybe we can hold a thought,if a beneficial one, before launching for the next “branch” .

Lastly,the monkey picture was taken at a popular tourist island in  Langkawi, Malaysia. There are constant warnings to the boatloads of  visitors:”Do not feed the monkeys”,as they can be quite excitable and  aggressive.

Good advice for those with “monkey minds” too!

This picture may depict the churn in the wake of a ship but it appears frozen and still .

Somewhere  amongst the tumult that sometimes engulfs us we need to find  that place where we pause the relentless motion and negotiate our way through….

For an earlier picture post on the same subject matter, see the below link: 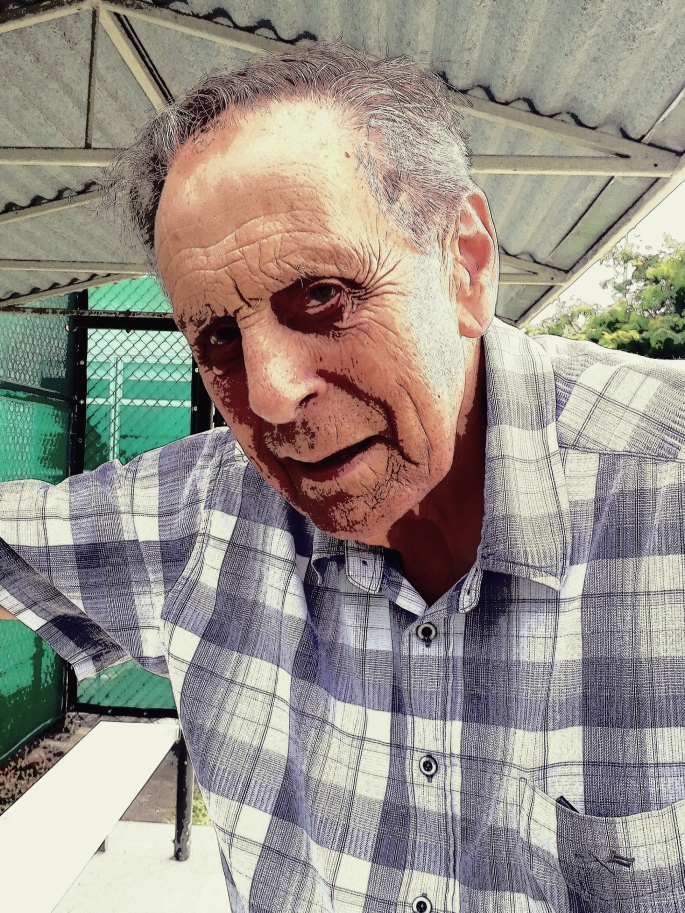 Barry is a top guy  with a droll sense of humour .In his professional life he was a photographer.

I felt almost embarrassed  asking if I could take a shot of him,and with a phone camera at that. I  mean,he probably took thousands of portraits of individuals and groups in a myriad of poses and settings and lord knows whatever else, mostly in the old school analog way – actual film,actual developing.

He was pretty phlegmatic  about the results of this shot . Probably not used to being on the other side of things…he looks skeptical!

I think my attempt passed muster ,but I  realised he knew so much more than I ever will about the art of photography,so it is a sort of privilege to capture a maven of the craft through my lens. 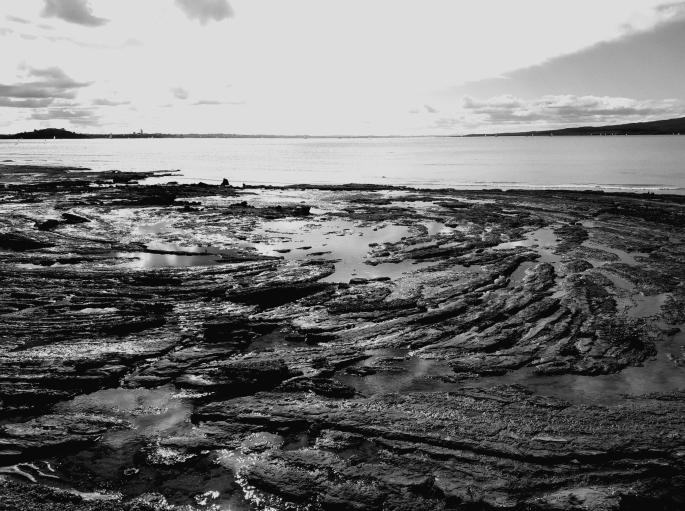 The curves and circles of a volcanic rock formation exposed on the low tide of Auckland’s Waitemata Harbour.

Dramatic and strong patterns that are endlessly covered over, then revealed again…

PS:Thanks to Teina and Ngaio at Tumanako House,Orakei for help with the Maori title to this post.

Urban mosaic with glassed pieces of the sky…

“In Zen they say: “Don’t seek the truth. Just cease to cherish opinions”. What does that mean? Let go of identifications with your mind. Who you are beyond the mind then emerges by itself “.

We love our opinions and our right to have them .

To hang on to them, defend them, fight others over theirs.

We sometimes identify with our opinions, forgetting that they are not actually us.

I think of opinions I have held strongly, then later discarded.Who I am didn’t actually change.`

Some thoughts and opinions I have are kind and beautiful; others, like the snakes who inhabit the Buddhist temple where I took this photo, are just a bit twisted and scary!

This site is under reconstruction.

No, not this blogsite – the empty building above  – draped in its exoskelton of metallic scaffolding and serving only a current purpose of a concrete canvas for graffiti.

A punctured and besmirched exterior for sure but she has solid bones ,and great potential in someone’s eyes.

The site is devoid of construction activity presently,dormant and just a bit sad ,if a building can be called sad.

I’ve talked about it before but there it is again, that gap or hiatus where nothing appears to be going on .But something is stirring and rebirth and a new purpose are sure to come.

Elsewhere on this blog ,there is a poem of mine  ,Bond/Flow, which mentions a fountain as a symbol of  hope.

I had the chance to read that poem to others today as a wish for hope for them.